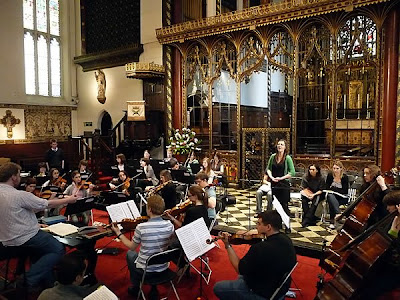 Our stage manager Nick’s Situation Opera did a staged Figaro with most of our cast last night (pic right: afternoon rehearsal). It was a benefit concert at St Paul’s, Knightsbridge (vicar: the Rev Richard Coles, one time member of 1980s pop combo The Communards, and rather successful guest on Have I Got News For You the previous week).

The concert was in aid of KwikPrint of Deptford, the only people who actually made any money out of it. It was meant as a fund-raising exercise for Helen, our Countess, to help her out with her Academy fees next year (new rules mean she’ll be rushed over seventeen grand for tuition, a sum so large Fred Goodwin could buy a round of drinks with it). But, sadly, the audience takings didn’t cover the cost of printing the programme.

Shame; the acoustics were good, the band and singers sounded great, and it was also priceless experience for all of us doing the staged Figaro later in the wek.

Actually someone else did benefit from the concert: the pub round the corner, who did an unexpected grand's worth of business between the band arriving and the bar closing twenty minutes later.