Why do we do it? Well, the buffet lunch helps

What a week it's been: rehearsals, ooh, every other day. Almost like doing a real opera.

Wednesday we had some additional music run-throughs which were, frankly, a bit overdue. I pitched up at 4ish at Goldsmiths, and we hacked through the 'Jeremy Kyle show subtitle: Figaro can't marry Marcellina because she's his mum' recit and sextet.

What always amazes me about singing is just how much physical and intellectual detail is involved before you can get it even half-right. The position of your jaw in the Italian 'a' vowel sound (totally different from English); knowing when to put in a passing note, contrary to what the score says, in a recitative; where in your upper body that particular vowel sound should come from; striking that balance between speed and restraint in the recits... Even in the simplest diatonic phrases, the capacity to get it wrong is immense.

Thursday was the Act III finale, which involves the ambitious notion of a Wedding Dance. There was a fine turnout, and I was pleased to see friendly faces such as Helen C, Xenia et al. But the choreography turned out to be quite a dog's dinner, or cat's cradle, or elephant's tennis match, or something. Nan's proposal for us all to do a 'seeeeexy' knee-bend as part of this terpsichorean wish-list delivered big in amusement value, if less big as an aphrodisiac.

Helen and I had a good giggle because it took us back to primary school, this 30-odd class of nice-natured but short-attention boys and girls being encouraged by Miss to do something a bit beyond their current skill set, and reacting by going off into little groups playing cat's cradle or football in the corner.

Then there was Saturday. We had a music run-through at Nan's house. A few people were held up by the G20 demo in central London, or by their full-time jobs, and it was a shame, because by the time they arrived the lovely buffet lunch Nan had dished up had largely been scoffed. Those of us who cycled there, and so of course arrived early, profited.

Richard B came along to accompany. It continues to astonish me how much time, effort and energy people are willing to put in for free, or for ludicrously small amounts of money, to come together and make an opera. All for no real payback other than a few minutes of people smiling and clapping. Most of it really does seem to be the sheer enjoyment of making music.
No comments: 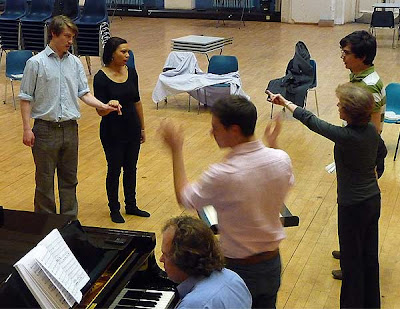 I've been pretty busy in the last few weeks, hence the lack of posts. I was at the Coliseum on 25 February to see the UK premiere of John Adams's Doctor Atomic. It's really good, well worth seeing: not especially lyrical or memorable vocal writing - no wonder, when you have Peter Sellars's absurdly magpie libretto to sit. What on earth can a composer do with lumpy text such as 'the 32 points are the centers of the 20 triangular faces of an icosahedron interwoven with the 12 pentagonal faces of a dodecahedron'? What is this, Open University?

But it's a brilliantly inventive and exciting orchestral score, and any production which starts off with a massive projection of the Periodic Table gets my vote. My review's on the Sky Arts website. I did my best to schmooze, 'best' not being especially good. Maybe giving Radio 3 people my card doesn't give a serious impression when the card happens to be for my cycle-touring guidebook.

I was also doing an article for a forthcoming issue of the BBC Music Magazine on Barber's Adagio for Strings: one of those 'if you like that, then try these' pieces. It's a funeral favourite, of course, and was played at those of JFK, Roosevelt, and Einstein. But not Barber's: perhaps not surprisingly, given his irritation about how the Adagio overshadowed the rest of his output. I've tried to select some unusual pieces to try next, so rather than go for (say) Mahler's Adagietto and so on, I've gone for mostly living composers: Kancheli, Bryars, Sandström, Pärt, Silvestrov...

Anyway, the rehearsals are beginning to blur into each other, rather like us when we're not certain of our onstage positions in the mighty Act II finale.

In fact, last week's rehearsal, on 26 February, covered that finale. 'Covered', in the sense of 'with something unpleasant'. It's a long, long scene, and a combination of Nan's interjections and the odd minutes where people had forgotten their parts made it drag. The trouble is, when I say 'odd minutes', I mean minute 1, minute 3, minute 5...

So it ended with a few frayed tempers. Just as well we didn't have real flowerpots, or else they could have been flying around the Great Hall in yet another dispute about whether we'd just missed out two pages. But it was nothing that four pints couldn't put right, though, as Henry, Nick, Casey, Dan and I proved in the pub afterwards.

But this Thursday was better. We did our double-casts one at a time, instead of our simultaneous experiment of a fortnight ago.

And it was good entertaining stuff: No 17, the scene in which Figaro finds out the truth about his father and mother. It's all like a 1780s version of Jeremy Kyle. We should really have had subtitles: I FOUND MY FORCED-WEDDING BRIDE IS MY MOTHER... FATHER WAS MY DOCTOR. Shame we don't have the budget for surtitles in the Hall.
No comments: