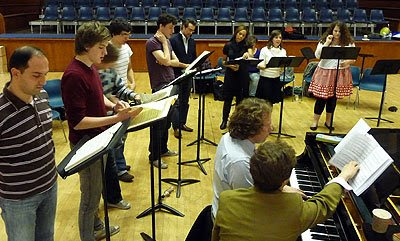 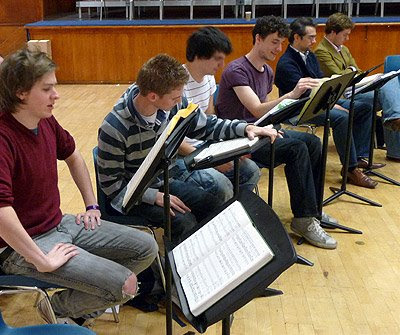 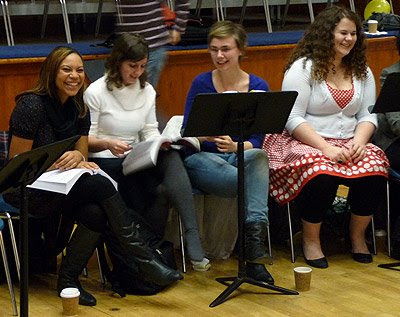 Welcome to our civil Marriage 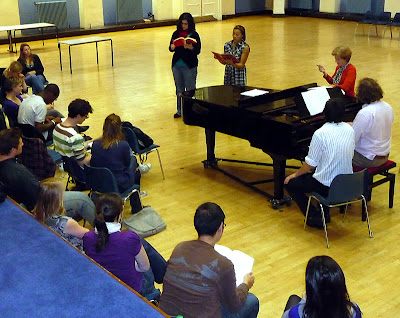 Is Opera Gold coming of age?

Yesterday was the first meeting for our 2009 production, Mozart's Marriage of Figaro. The parts haven't been all assigned, or the auditions done, yet. So it was really a sequence of run-throughs of this duet or that aria, not a rehearsal.

Partly because there are some welcome returning faces: Ros and Helen C, for instance, who finished at the same time as me in 2006. Ros was a show-stealing Papagena when we did Mozart last time, in 2005; Helen was involved then too, but both have been busy earning money to pay their council tax to invest in Icelandic banks. 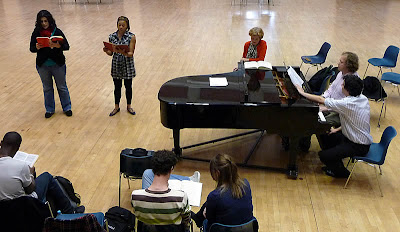 Partly because we'll be double-casting for the two nights again this year, so it's just as well we have our growing band of regulars: Dan, Charlotte, Ryan, Casey et al.

And partly because we have a few singers from Trinity hovering around. We've had a few informal links with them recently: Mario, who sang Don Jose and Grimes for us, was a student there, and several Goldies took part in a Trinity-based production of Carmen last year. Helen B, who sang a fine Micaela, is one of the Trinity singers who was there yesterday.

That production included me, and you'll be pleased to know it was the first time I've worn eye make up. (Er, apart from once a long time ago, but look, I can explain everything, and the photos aren't as compromising as they seem, honest.) Anyway, my girlfriend howled with laughter when I rolled up home each night after Carmen having been too busy or lazy to wipe off my eye-liner. "You look just like your mum", she kept saying.

But I couldn't help feeling yesterday that we had, well, come of age somehow. We now have four (or possibly five) productions under our belts: Venus and Adonis, Dido and Aeneas, Magic Flute, Carmen, Peter Grimes. I hesitate to use a word like 'serious' - you can always tell when I'm taking the piss, because my lips are moving, or alternatively, my fingers are pressing some keys - but though we may be a small amateur outfit in scruffy south-west London, we're a genuine outfit. (At least, I hope that's what the several Trinity students think who've come along fondly hoping to plump up their CVs.)

I mean, Opera Gold even has its own page on Wikipedia, so we must be serious. (Mind you, it was me who put the page up.)

Having all those people chasing a limited number of parts, double-casting notwithstanding, means (as the astute Mr Crowhurst pointed out to me, possibly at length, possibly while Tim was trying to play the piano) there might be a few egos under pressure. But, to paraphrase the old saying, you can't make an opera without breaking egos. And a bit of friendly competition, done in the right spirit, is good for everyone. Just so long as I get the part, of course.

So, has Opera Gold come of age? Maybe that's meaningless. Maybe that was just a good line to start the first blog of the new season.

Just as well. When I came of age, at my 18th birthday party, I got off (a) my head on brandy and (b) with a girl called Gill who was wearing a man's three-piece suit and had muscles like an Olympic swimmer. It all ended rather strangely, in Cherubino-like circumstances. But look, I can explain everything, and the photos aren't as compromising as they seem, honest.

So there you are. Beware the coming of age.

See you all next week.
No comments: