BOGOF (Buy one, get one free)

We're double-casting, but have limited rehearsal time. Our staging rehearsals are therefore bizarrely taking place with both casts simultaneously. Yesterday was a fine example of this operatic two-for-one deal.

In the arias it's OK - there's just twice the volume, trios become sextets and so on. In the recits though it's a bit confusing, as my idea of the right timing is clearly different to Panos's, my twin Basilio. You know that off-putting echo you sometimes get in international phone calls? It's like trying to do a rehearsal by phone to Qatar.

Anyway, Panos is being very helpful, supplying other people's lines when they can't remember, which I know they appreciate, and has lots of suggestions on staging for Nan. 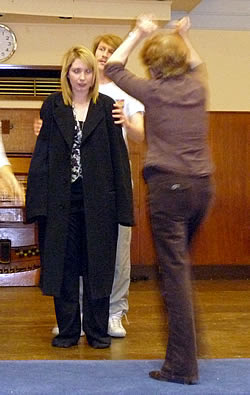 It did get a bit crowded, though, as we were working out our moves for the bit where Cherubino and the Count are hiding behind some chairs (a difficult feat to pull off with those skeletal plastic stacking models). Synchronised opera is unlikely to be the new minority sport at the 2012 Olympics.

At one point Panos managed to swop places, so that instead of me/Nat and him/Casey, it became me/Casey and him/Nat. Casey reacted with her usual fit of laughter and giggles. I wish I could swing that trick at times of stress, such as when buses cut me up as I cycle up Peckham High Street.

Anyway, we finished with Non più andrai, with the stereo Cherubinos of Miriam and Charlotte (picture). Nan suggested that Cherubino should be dressed in a military greatcoat, patently over-large for comic effect. Nick, the not exactly petite stage manager, provided his overcoat. As he said, if that isn't far too big, then you've got problems.