Triumph that fired on all cylinders 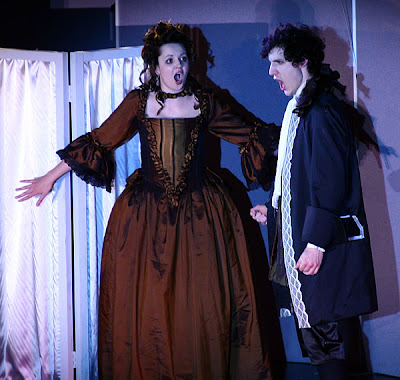 Well, we're finished for another year. As usual, I woke up the Sunday after the final performance feeling like I'd just been let out of jail, or perhaps completed a long community service order, and could now enjoy the rest of my life.

Make no mistake: this was our most successful opera so far. There were a few minor pauses, missed entries and swopped lines, but overall both nights were a joyous, resounding triumph. It would be invidious to pick anyone out, because everyone contributed, and everyone was on top form. Congratulations all round, from singing to acting to costumes to orchestra to stagehands... and of course directing and conducting.

Audience response was fantastic too, form a near-full-house on the Friday night, and a more-than-full-house on Saturday. (They were a bit more savvy, because they knew the right bits to laugh. Or perhaps they just had better eyesight and were able to cope with the minuscule seven-point typeface on the printed libretto.)

More than ever I feel proud of our production, and what we've all achieved. Five years ago we were doing makeshift semi-staged affairs in Deptford Town Hall with a chamber ensemble. Last week - no doubt, this was the real thing, with the best set and costumes we've ever enjoyed, and a genuine opera-company feel. There'd been quite a bit of tension in the weeks leading up to dress rehearsals, but in the last few days it all came together and the spirit in the canteen - er, sorry, I mean dressing room - was really good.

Opera Gold has made another step forward this year, in terms of scale, style and standard. It's been a privilege and pleasure for me to share both onstage and backstage with so many talented, pleasant and fanciable people. Congratulations to all who have embraced this rare opportunity, and thanks to Nan for her sheer determination and unbounded generosity of spirit to keep making it all work so well.

That's all a bit serious, so before I go off into Gwyneth Paltrow mode and start thanking my marm and my parp and my fyemly and weeping down the front of my frock, here's some of the amusing images I'll take away with me from our fantastic Figaro of 2009...

• The dressing-room shriek of "Aaargh!!! Oh my God!" from Chris that had the ladies' chorus rushing over thinking he must have lost a finger in some sort of freak trombone accident. What's the matter, Chris? "There's a... there's a... cockroach!"

• Ros about to go on as Marcellina, realising the prop she needed was on the other side of the stage, requiring someone to go across the open door in full view of the audience. Thinking quickly, the slim Ros summoned the slightly less slim Nick to do the fetching instead. Manfully, he scrambled across the floor on his belly to get the prop, then threw it back across the audience-visible gap. Nobody noticed. Only then did we realise that had Ros waited 30 seconds, the door would have closed anyway, allowing her to fetch the prop at leisure. Well worth it to see Nick doing his Swampy impression though.

• Xenia, Anna and Nan in the dining room of Nan's house knee-deep in sewing machines and costumes. Most of those things you were wearing came from Streatham's charity shops, where Nan is a regular. You can just imagine the assistants there whispering after Nan's been on yet another wardrobe-bolstering spree: "Such a shame. She used to be an international opera singer, you know. Look at her now. Buys her clothes from Oxfam."

• Catching a sight of Ozzy Osbourne in the toilets during the interval, and realising it was me in the mirror in my Basilio wig.

Thanks again everyone, and congratulations. It's been fabulous, but for various reasons I just won't have the time to be involved next year.